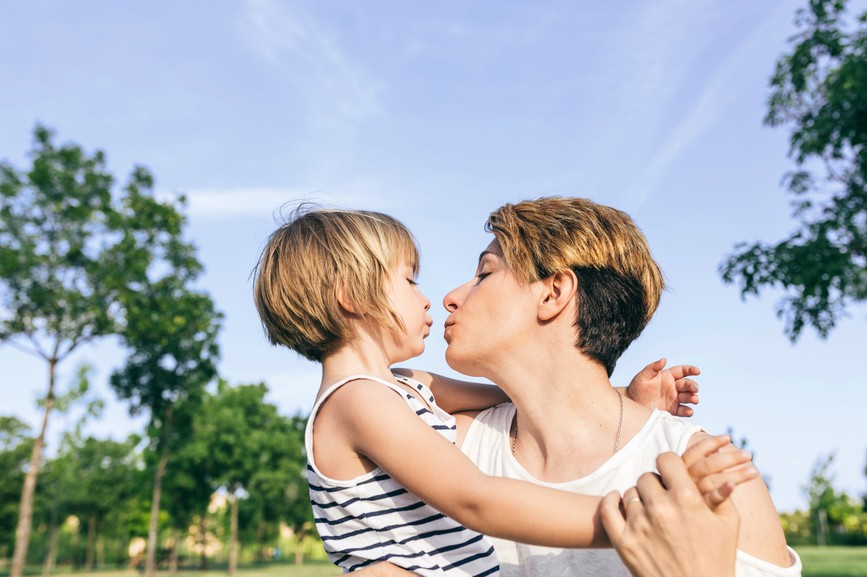 In 1957, my grandmother left her husband and two daughters; my mother was just six months old. It wasn’t every day you heard of a man being left with two young children, daughters no less. And neighbors had a lot to say about it, in hushed voices of course.

Divorce alone was an entirely taboo subject back then, but add in the little girls? It fueled the stories about “the scandal” told around town about my family and our history. For context, when my grandmother was little, she often wandered door to door begging neighbors to feed her while her mother, my great-grandmother, entertained sailors coming through the local port.

I don’t have much more detail other than the implication that something bad happened to her daughter, my grandmother, with one or maybe many of these men. And those events caused my young grandmother’s mental development to stall. Based on the information I have, it seems her immature emotional and mental capacity led to her decision to run from her own children.

Maybe she felt she couldn’t handle the responsibility of two young girls, afraid that what happened to her would happen to them. Her mother allowed these events to happen, maybe she would too. Maybe it was a straightforward case of postpartum depression. I’ll never know.

As a child, I was fascinated by my elusive grandmother. I wanted to know everything I could about her. Every time I asked questions, and I had a lot of them, the answer was the same, “I have no idea what became of my mother.” And that’s because it was a forbidden topic in her household. She wasn’t even allowed to say her name.

I always felt there was something she wasn’t saying, that she was somehow being dishonest with me. How could she honestly be so nonchalant about growing up without a mother? There were ambiguously winding stories involving caretakers taking advantage of her and intimate partner violence which is mental, physical, and/or emotional abuse from a current or former partner. None of the information is linear. I knew it then and I know it now.

People don’t give kids enough credit, I knew she wasn’t ok. It was clear that my grandmother’s traumatizing experiences with those sailors and her own mother had become my own mother’s traumas. And I now know that they have also become mine.

By the time my mother gave birth to me, she was a full-blown alcoholic. It was her way of filling the silence of her upbringing. The hushed voices and denial of her experiences and feelings.

My earliest and most formative experiences of my abuse exist as mental snapshots. Moments string together forming the tapestry of my life.

Every man my mother got involved with was an abuser. And therefore, so was every man I grew up with.

For me, this was normal. As it had been for my mother and her mother before her. So, when I met the person I would become a parent with, his similarities to the men I’d been raised by (or near), were normal too.

I met my daughter’s father when I was twenty one and got pregnant the next month.

He quickly became controlling. Telling me to cut people out of my life, hovering over me, never leaving me alone no matter how much I begged, taunting me. It got so bad that I resorted to locking myself in the bathroom to get some space. I tried to rationalize his behavior and have conversations with him. But each attempt left me questioning my own sanity.

I thought pregnancy and childbirth was going to be just like the movies I grew up with. An idealized glorification of a real life experience. Airbrushed and perfectly curated. I grew up thinking that having a baby looked like two people who are madly in love breaking down in tears of joy at the perfection of their baby. Overwhelmed at the sight of their baby being placed on the mother’s chest. Taking their first breath as a new family.

This was not my experience.

My initiation into motherhood did not culminate in an exaltation of love shared between myself and my partner. Nor did I feel an instantaneous and overwhelming attachment to my daughter.

Instead, I found myself in a shadow of numbness. Entirely detached from my body. I remember being ashamed of myself, confused by the lack of emotion I felt. I was staring down at this human that I’d carried in my body for ten months and I felt…nothing? Holding my daughter, feeling numb, that was the moment I knew that I had to get out.

I chose something different for myself. For my daughter.

I left her dad when she was one month old with nothing but a mattress pad and bag of clothes – a picture of her sonogram stuffed in the front pouch. I didn’t realize it at the time, but this was the first time I’d taken control of my life. I made the decision that would change the trajectory of my future.

Reflecting on everything proved to me that in order to understand ourselves and where we’re at in our journeys, we have to go back to where we came from. We need to explore what and who shaped us. Because it’s only from knowing our place of origin, where we can begin to understand, deconstruct, and heal the parts of us that were misled.

“When these children grow up, if their Adverse Childhood Experiences remain unaddressed, they are vulnerable to repeating the patterns they learned in their own childhoods. They bring dysfunction into the lives of their children and so it continues. This is called the cycle of intergenerational trauma.” The Center For Childhood Counseling*

This was published in March of 2020 and explains that when a child is exposed to extreme neglect, dysfunction, and abuse, it becomes trauma. This trauma impacts the brain development of the children experiencing the abuse.

The article goes on to talk about a term called “learned helplessness” which many trauma survivors develop. We essentially lose the will to fight for a better life. This also gets passed down to the next generation making it even harder to overcome intergenerational trauma.

Over the past few decades, studies in epigenetics suggest that the experience of traumatic events is stored at a cellular level and passed down genetically. Because trauma changes our genes.

Studies of extreme group trauma such as the descendants of enslaved people, grandchildren of Holocaust survivors, and the children who were exposed to famine during the Dutch Hunger Winter Famine* show that genetic markers of prolonged stress and trauma present themselves in utero.

Ten years after I reclaimed my life and chose a new path for myself and my daughter, I recounted the circumstances around my daughter’s birth and the act of leaving her father to my trauma-informed therapist. They told me I was the victim of narcissistic abuse.* My feelings of isolation, paralysis when I saw his name come up in my email, and the smear campaign he’d started with my family to try to take sole custody of our daughter were very common in narcissistic abuse. Especially among single mothers.

I inherited a strong lineage of silence and numbing. And that trait stops with me. I know how to identify and name abuse as what it is. I am committed to using my knowledge, my experience, and my voice to break the cycle. My daughter will not grow up under a veil of silence in a world where abuse is the norm. She will learn to use her voice because I have.

This article goes more in-depth about how and why I left my daughter’s father a month after her birth.

*The Center For Childhood Counseling

Lindsay Love (She/Her) is a writer, singer/songwriter, and single mother to her thirteen-year-old daughter, Dylan. They live together at the base of a mountain range in the PNW. She is passionate about using her voice to bring awareness to social issues in order to enact systemic change. Follow her on instagram @iamlindsaylove Read More by
Previous Why Each Phase of Motherhood Illuminates a Gap in “The Village” and How to Fill It
Next Introducing the Mother Leader Series: Where Trailblazing Women Reveal the Reality of Their Postpartum Journeys