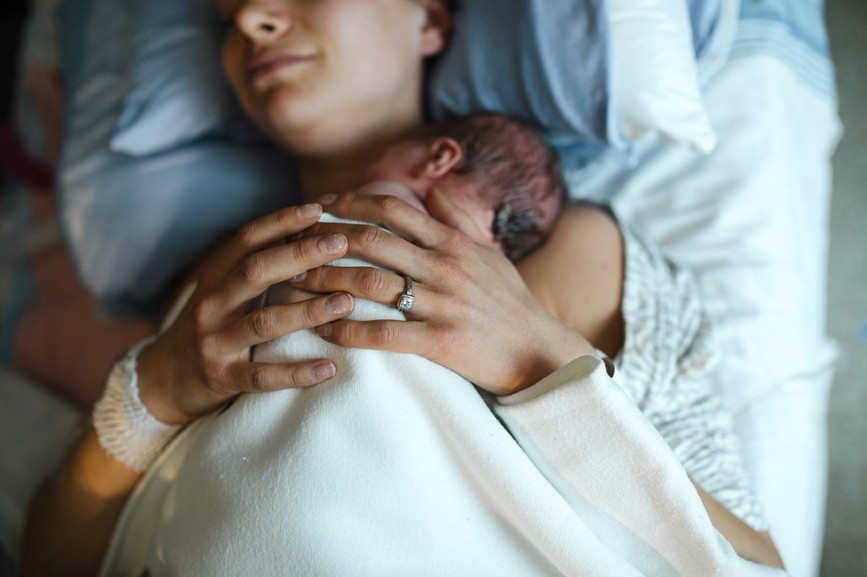 Balancing motherhood and self comes very easily to some. I’ve seen many friends give birth, create boundaries, bounce right back to the body they had before, get a nanny, go back to work, all without breaking a sweat. I see moms easily and naturally navigate through the many stages of childhood while their children learn to crawl, walk, and talk right on schedule.

That’s not my story.

When I got pregnant, I was a youngish woman, strong and healthy in body and mind. I thought for sure I could pop my kid out naturally and be back at brunch with my little man attached to my boob. Instead, I left the hospital a different person, in a changed and broken body, with no sense of self or confidence in my new role as a mother.

Even some of my closest friends wouldn’t know how I was feeling. Being a dancer, and a Polish girl from Pittsburgh, I was taught to suck it up and power through. So I did.

On the outside, I smiled and joked about my body and what motherhood was like. I was the first of many of my friends to have children so I didn’t want to ruin it for them by telling them the truth. At least, my truth.

On the inside? I was falling deeper and deeper into The NOTHING (cue theme from The Neverending Story). I got back in shape, I went back to work, I made homemade baby food, and told myself “this is just what motherhood is.” Looking back, it was like I was sleepwalking through life.

I’m a crunchy granola kind of gal. I’m a long-time vegan, yogi, recycler, natural fiber wearing, love to pick up litter on the sidewalk kind of human. So naturally, I prepared myself for a natural birth at one of the two Birthing Centers in New York City. I have been a dancer my entire life and completely trusted my body’s ability to do something it was born to do. My husband and I took classes in Hypno-Birthing to prepare for the magical entrance of our son.

I wanted my experience to be like my ancestors, drug-free and in my own time. I KNEW people who had that so why shouldn’t I? And I have always considered myself to be strong, in fact, stronger than most. Of course, these abs would push a baby out in record time.

How very VERY wrong I was.

40 weeks came and went, along with my dreams of using the Birthing Center. Now, I had to mentally prepare myself to deal with doctors, IV’s, and Western Medicine. 41 weeks: I got extra acupuncture, ate spicy foods, had sex (very awkard and as sexy as you think at 42 weeks pregnant).

I even jumped on a trampoline! But still nothing. 42 weeks: Time’s up. I don’t get to be in charge anymore. Never in my life have I felt so vulnerable or so out of control. I was induced with the drug Pitocin. I strongly believe that if men experienced what this drug does, it would be banned from use! I didn’t get an epidural until many hours later when I went into shock from the pain.

You see when you go into labor naturally your amazing, beautiful body releases hormones that help you deal with the pain of labor. Pitocin skips that step and the hormones are never released. So the pain of a contraction hits you like a tsunami.

Women are told to not even have caffeine during pregnancy and treat their bodies like Temples. So why would I be ok with stuffing it full of narcotics now?!

At one point I was used as a guinea pig for a new technique (at that time) using a balloon to help open my cervix. I agreed to let my midwife give it a go, but I did not know that came with a side order of student doctors gawking at my vagina with a bright white spotlight pointing at it.

Tears poured down my face as any sense of dignity I had left slipped away. In the end, none of it worked. I never dilated further than 4cm and ended up having a C-section around 4:00 am the next day. I was so grateful to have a healthy baby and for it all to be over.

At the same time, I felt almost dead inside. I loved my son from the second I saw the ultrasound, but after the experience of his birth, I hated myself. It turns out that this is a form of postpartum depression that isn’t very common and rarely talked about.

I saw myself as a failure for not being able to give birth naturally. I felt as if the body that carried me through a life of physical challenges. I mean, I originated the role of Bambi in the impossibly difficult Broadway show Curtains!

My body had failed me. My milk took longer to come in because I had a C-section. Of course, no one explained that from a medical point of view. I just thought I was failing at that too. Our son was a lazy eater, which caused him to be a bad sleeper, which made him fussy, and my husband and I exhausted.

I felt so alone.

I had my sister and mom to turn to with questions but I didn’t even know the depths of my own depression so how could I express how lost I really felt? I just thought this was all normal! Part of becoming a mother!

Why aren’t all new moms assigned a baby nurse or therapist to help them through postpartum??

We aren’t experts. We’ve never done this before! We are new moms!

My husband and I joked that Elliot’s birth would be an omen for the kind of person he would be. A day late and a dollar short…and difficult! Turns out, we weren’t wrong. He hit all his markers late and didn’t speak real words until he was 3 1/2. I blamed myself for all of it. I thought maybe if we could create a positive relationship with words he’d want to use them.

Turns out I was right. Finally, I was right about something. I was also right about the years of struggle he would face because he wasn’t given the support he needed at an earlier age. Often he is incapable of dealing with a situation or his own feelings because he didn’t have the tools of simple communication at an early age. But when I think about it, neither did I when it came to motherhood.

One becomes skilled at what one practices. And I had become an expert at second-guessing myself and feeling like a failure. My doubts on motherhood have bled into other areas of my life leaving me almost paralyzed at times. Elliot experiences this when he gets an answer wrong in school or loses a game.

He becomes emotionally out of control.

Most people think his reaction is over the top and should be shut down. But that moment is VERY real for him and he is incapable of creating space to calm down. Again, this doesn’t fall under any kind of diagnosis other than being a “highly emotional child” with an anxiety disorder so there is no help to be had. Leaving me feeling alone again and without guidance.

Elliot is a hurricane of emotions and just getting through the day feels impossible sometimes. But at some point in the last couple of years, I looked at him and realized that what he was expressing on the outside was exactly what I was feeling on the inside. We were BOTH traumatized by his birth.

Once I finally realized I had suffered from postpartum depression, and probably PTSD from the events of his birth, I was able to seek the help he and I both needed. I was able to start talking about what happened and gaining support from other moms.

Along with talk therapy, Elliot and I both use Reiki to help calm our anxiety, stress, and anger. I became a Reiki Practitioner and have been able to help so many mothers, in all stages, heal and process this incredible, and at many times, completely f’ed up experience of motherhood.

I still don’t know what I’m doing and most days feel defeated in some way. But that’s OK because I know I’m not alone. Elliot and I are in this together.

Megan Sikora (She/Her) is mostly known for her high kicks and squeaky character voice on Broadway Stages. She also has a reputation for portraying the “sad mom” on TV. But if you ask her, she considers herself a healer. She uses dance, song, laughter, hugs, vegan food, and Reiki to mend a soul. You can learn more about her at MeganSikora.com Read More by Megan
Previous Why Ceremony is Missing from the Transition Into Motherhood and How We Can Bring It Back
Next A Simple Way to Power Up Your Lemon Water to Help You Beat Utter Exhaustion