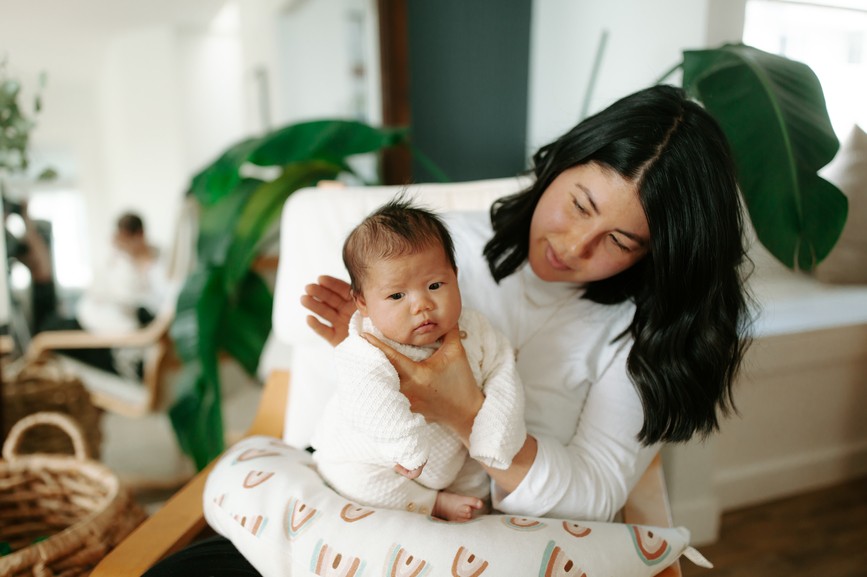 It started one ordinary day in a prenatal class. I walked into that room as an open-minded future mama, and left with an energetic sandwich board reading “breast is best.” As I listened, in awe of the science supporting breastfeeding, I decided right then and there that I would not be giving my soon-to-be baby a bottle, thank you very much.

Then, I had an actual baby.

It felt like the carpet had been ripped out from under me as I struggled to get my son to eat. Why hasn’t anyone ever told me that this could be so f*cking hard? Maybe they did! And in my ignorance to the realities of breastfeeding and new motherhood, I just assumed that it wouldn’t happen to me?

I always thought that I would love breastfeeding and that it would be easy. I think a lot of us do. I didn’t expect the excruciating pain, helplessness, self-doubt, shame, frustration, unhealthy comparison, and sadness that seems to be part of the deal.

I spent the fourth trimester filled with shame for not being able to exclusively breastfeed my baby. I felt like a failure.

In hopes of increasing my milk supply, I decided to take domperidone along with some natural tinctures. Fun fact: domperidone is a drug that is used for nausea, vomiting, and treating stomach pain in end of life care. One of the side effects is lactation.

I also pushed myself to pump around the clock so that I could increase my supply and provide him with as much breast milk as he needed. I was doing what he needed from me, right? I was being a “good mom.”

I swear there were times that the pump started talking to me during those late night pumping sessions. “Welcome to motherhood,” it said “no one said it would be easy.”

I can honestly say that I felt totally and completely trapped at home attached to that pump. I wasn’t able to leave the house for more than a walk because once he was up I’d have to breastfeed him, give him a bottle of either pumped milk or formula to finish the job, and then plug myself into the pump yet again.

It was isolating in a way that I had never thought I would experience. I later learned other moms have this experience too and what I was doing is called triple feeding.

Looking back, I think I am still glad I did it? I pumped for five months and gave him everything I had. As much milk as I could produce (even with the help of medication) and literally all of my time and energy. But then some days, I really wish that I would have been easier on myself. That I gave myself permission to stop pumping. To allow myself to give him formula instead of feeling so trapped. I realized maybe I picked up the wrong sandwich board.

In those first few weeks, I spent countless hours feeling like I was drowning because our baby wasn’t gaining weight fast enough. Even though my son is now very active, still skinny and mostly food averse, but nonetheless a healthy toddler, that time was so incredibly dark that it still hurts to think about it. He’ll be eating us out of house and home one day, right?

As I wait for that day to come, I now have a newborn who is attached to my boobs 24/7. He has outranked my partner as #1 fan of my boobs. And I’m not sure he will ever give up the title.

As I write this, he is two months old so I’m still in the early days of postpartum. But, this time around I am in a completely different boat when it comes to breastfeeding.

I experience a unique pain in my nipples due to Raynauds, which is a disorder that causes decreased blood flow to different parts of the body. According to a source online it is, ‘not dangerous, just painful and frustrating’. Uh…yea. I know.

Did I mention that my nipples are overworked and were just the other day cracked and bleeding, recovering from a bleb and mastitis? What’s a bleb? It’s a milk blister. On your nipple. Should that even be allowed, a blister on your boob?

The latch was good early on, so my milk supply has been way better than with my first son. That and our second little guy loves to eat, so much that he’s almost doubled his birth weight. He has been referred to as chubby more times than I can count.

You’d think I’d be thrilled right? I did it! It’s natural! Breast is best! Where did I leave that sandwich board? But there are different challenges as I am now the sole source of food for him. And to pump and give him a bottle will only create more work for me since I’m working from home.

I miss the “freedom” that having a partially bottle fed baby allowed me with my first. I mourn the connection family and friends were able to create while feeding my son. And I really miss work. But that is a whole other can of worms that will have to wait for another day.

Even though feeding has come with these challenges, I have been able to be much more gentle and forgiving of myself. I can accept and let go of expectations and be present in the moment. With myself and with my baby. Because before I know it, my little newborn is going to be taking after his big brother, running up to poke my butt and tell me that I’m stinky. No longer needing my “liquid gold.”

My hope for you mama is that you can let go of those expectations too. And know that it is okay to feel all of your feelings and make the choice that is best for you. So if you’re currently holding that sandwich board, I invite you to put it down. There is no one right way, there is only your right way.

Jayme Cline (She/Her) is a late thirty something human being who, when she is not attached to a tiny human by her hands or nipples, enjoys being outdoors, reading, writing, singing, cooking, baking and cleaning. She works outside of the home because that is better for her mental health. She is a stitcher for various theaters and tv and film productions making costumes for a living and considers herself very lucky. Sometimes she does a bit of health coaching on the side because she is passionate about all things health, but keeping it simple is her jam. She lives in Vancouver, BC and is looking forward to traveling again, although maybe on a solo trip first. You can follow her on Instagram @simplyhealthywithjayme Read More by Jayme
Previous Why Women Need to be Aware of the Wildly Unethical History of Women’s Health in the U.S.
Next Why Postpartum Depression & Anxiety Don’t Always Look How You Expect